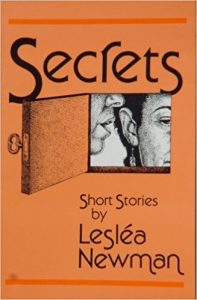 Eleven short stories about the lives of lesbians, told in a variety of voices including the daughter of a lesbian couple, a stone butch about to be flipped, and an angry dyke whose lover has just gone straight. Each story has a secret, which, whether revealed or kept, influences the characters’ lives. Titles include “Right Off the Bat,” “The Dating Game,” and “One Night in the Middle of My Lover’s Arms.”

“Newman is a remarkable writer and this collection highlights her ability to create fully realized characters.”

“Secrets is a book filled with compassion and generosity of spirit from a woman who knows the importance of looking with clear eyes at where we come from. Very much recommended.”

“Original and generally worth reading. Recommended for all library collections.”

From “Right Off the Bat”

My mother’s a lesbian. That’s the first thing I want you to know about me. I know it’s not really about me, but it sort of is, and anyway, I like people to know right off the bat, so they don’t get weird on me later when they find out.

Like Brenda, for instance. Brenda used to be my best friend at my old school, but then one day she just stopped talking to me. For no reason. I mean we didn’t have a fight or anything, like the time she told Richard Culpepper I liked him, which was a lie. We didn’t speak for almost a whole week that time. But this time there was no reason. I mean she crossed the hallway when she saw me coming and everything. I finally cornered her in the bathroom between homeroom and first period and asked her what was wrong. She said, “Go away. My mom says I can’t talk to you anymore. Your mother’s a dyke.”

Dyke is a bad word for lesbian, like Yid is a bad word for Jew. Being Jewish means I go to temple instead of church, only we hardly ever go anyway, and we have Chanukah and Passover instead of Christmas and Easter. Being a lesbian means my mom loves women instead of men. Not everyone knows these words. Sometimes my mom says dyke when she’s talking on the phone or something, but she says, that’s okay. Lesbians can say dyke but straight people can’t. I don’t really understand that. I don’t understand a lot of what my mom says or does. She’s not like anybody else’s mom I’ve ever met. Like even what we eat. My mom won’t let me eat school lunches, though sometimes I save up my allowance and buy one and throw out the lunch she’s packed for me. At my old school I liked macaroni and cheese the best with chocolate pudding for dessert.

My mom’s not the world’s greatest cook and we always fight because she wants me to eat weird stuff like tofu which is this white square that looks like soap and tastes like nothing. Just to get her to make me a Swiss cheese sandwich is a big deal because she has to give me a lecture about dairy products and how they clog you up.

If I’m lucky Linda will be around and tell my mom just to lay off. I like Linda. Linda’s the reason we moved here in the first place, so she and my mom could be together. Linda’s well, she’s part of the family. She’s my mother’s, well, they use the word lover, but it’s not like she’s Casanova or anything. Lots of kids have single parents, and lots of kids’ moms have boyfriends. My mom has a girlfriend.