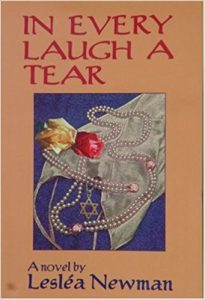 Shayna Steinblatt, a nice Jewish dyke, meets Luz Maria Borges, a handsome Puerto Rican butch with bedroom eyes. But before she can ride off into the sunset with her beloved, Shayna must deal with a crisis: the kidnapping of her beloved Bubbe, 99-year-old Tzeydl Zimmerman, who has been abducted into a nursing home.

“…a strong, powerful novel. I was drawn in from the beginning and looked forward to reading it day after day. Ms. Newman’s talent with characterization is obvious here.”

“Delivery for Shayna Steinblatt,” a deep, muffled voice called. Strange, Shayna thought, I’m not expecting anything. She made sure her robe was securely fastened before she opened the door and gasped, for there were a dozen long-stemmed peach roses all wrapped up in lavender tissue paper lying on the porch.

“Wow.” Shayna bent down to pick them up, closed her eyes and inhaled deeply, almost drowning in their deep fragrance.

Shayna’s eyes flew open. “Luz,” she cried, as none other bounded up her steps. “What are you doing here?”

“But what’s the occasion?”

“That was my Jimmy Stewart imitation. Wanna hear Mae West?”

“You gonna invite me in to peel you a grape, sweetheart, or do I have to strut my stuff out here for the whole neighborhood?” She put one hand on her waist, the other behind her head, and shifted hips from side to side.

Shayna laughed. “Wow, Jimmy Stewart and Mae West chipped in to buy me a dozen roses.”

“Of course they’re from me.” Luz feigned indignation.

“Wow, that’s even better. The handsomest butch in town sent me a dozen roses.”

Now it was Luz’s turn to blush.

You are here: Lesléa Newman > Books for Adults > Novels > In Every Laugh a Tear