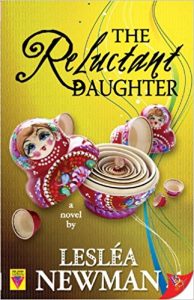 A story every daughter will recognize, The Reluctant Daughter depicts the struggles of Lydia Pinkowitz to communicate the realities of her life as a lesbian, as a feminist scholar, and as the woman she has become to her mother Doris. After years of hoping to attain her mother’s love and acceptance while struggling to live a true and honest life, Lydia eventually acknowledges her mother will never really see her.

When Doris develops a life-threatening illness, Lydia is forced to make a life-and-death decision of her own: should she make one final attempt to heal her relationship with her mother or simply let her go?

Read a review on Edutechnologic.com.

Read a review in Curve Magazine.

“The Reluctant Daughter is a moving look at a woman forced to come to grips with her remote mother’s illness and vulnerability. With this novel, Lesléa Newman continues to tell the stories of lesbian lives with her trademark humor, discernment, and empathy.”

–Alison Bechdel, author of Dykes to Watch Out For and Fun Home

Read the review by Barbara Ardinger on ForeWord Reviews

It took me half a century to find my mother.

My mother wasn’t lost like the poor child whose sad face graces the poster hanging outside the convenience store that I pause to study every time I dash in to buy a carton of half-and-half for Allie’s morning coffee. Nor was she lost like the small gold Jewish star my parents gave me to wear around my neck when I turned sixteen which slid off its chain one day when I wasn’t looking and disappeared completely as an ice cube melted by the sun. No, I’ve always known exactly where my mother is: sitting in the living room of the split-level house I grew up in on Maple Drive, a quiet tree-lined street in Oakwood, New York, a suburb smack dab in the middle of Westchester County. I can locate my mother any time I want to, but that doesn’t matter. She is still missing in action. At least to me. My mother and I are so estranged, she doesn’t even know that we’re estranged. It’s not that we don’t communicate with one another. We speak on the phone once a month, sometimes once every other month, sometimes once a season. I am always the one to break the silence between us and dial my parents’ number, usually during a weekday when I know my father isn’t home.

It’s never my idea to give my mother a ring. The thought would never even occur to me on my own. If it weren’t for Allie, years could easily slip by without my mother and I having a conversation. But Allie, my sweet, kind, wonderful, not to mention drop-dead handsome as a butch can be Allie, can’t seem to mind her own damn business and leave well enough alone. It can happen on a Tuesday. Or a Thursday. At around three o’clock, I’ll climb into our just purchased, “previously loved” station wagon and drive toward Main Street to do some errands. Allie and I reside in a quaint, liberal, college town on the southern tip of Maine called Paradise, and it pretty much lives up to its name with the smell of the ocean permeating the air all year long, the beauty of the landscape equally breathtaking during all four seasons, and on top of that, the many shops that hang rainbow flags in their windows, letting both the locals and the tourists know that ours is a gay-friendly town. I pull into a parking space right in front of our organic food co-op, unsuspecting, maybe even humming to myself. It’s a glorious spring day and I’m generally a happy, humming type of person. After I shut the ignition, I pocket my car keys and reach into my shoulder bag for my list of things to do: Pick up dry cleaning, drop off vacation film… As I scan each item planning my route, my eyes catch on something. Three little words scrawled in Allie’s small slanted southpaw handwriting that make my heart beat faster. Not “I love you” which is written at the very bottom of the page underneath buy battery for alarm clock. No, the three little words that stop me cold, inserted between don’t forget kitty litter and mail car payment are “call your mother.”

“You call your mother,” I say aloud. It’s a mean thing to say even if Allie is miles away at the lumberyard she manages and cannot possibly hear me. Allie would give anything to call her mother, but the woman died two decades ago, when Allie was barely twenty-seven. Allie is an only child and her mother was her only parent. They left Puerto Rico when Allie was five, first living in the Bronx with some friends they knew from the island, and then moving up to New England because Allie’s mother wanted her daughter to breathe fresh air, live among grass, trees and flowers, and be close to the sea. Allie says her mother loved her more than life itself, and she never felt like she was missing anything by not having a father, siblings, or any kind of extended family. Until her mother died, that is. After Allie lost her mother and before I came along, Allie was all alone in the world. And even though Allie is once again a part of a family of two, a family she and I have created, she still misses her mother terribly. Every year on November 11th, the anniversary of her mother’s death, Allie wakes up in tears, rises without a word and lights a pure white seven-day candle in her mother’s honor. Allie and I got together four years after her mother’s death and at that point, she couldn’t even mention her without breaking down completely. Things are better now, but still, Allie’s voice shakes and her eyes grow moist whenever she speaks of her mother. Call your mother. I stare down at the words, seething….

You are here: Lesléa Newman > Books for Adults > Novels > The Reluctant Daughter