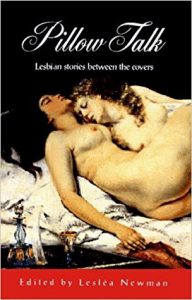 Editor Lesléa Newman left no stone butch unturned as she searched high and low for the sexiest stories she could find. Tales of lust, love and latex abound between the covers and elsewhere in stories by Barbara Wilson, Mariana Romo-Carmona, Jess Wells and others.

“Lesléa Newman, who may just be the best editor going, has gathered an astonishing collection of lesbian stories that are as hot as anyone could wish, but are also much more.”

“Discriminating readers will find the stories in Pillow Talk unexpectedly fresh and well written, portraying sex in all its emotional complexity, as well as in every position known to the Western world.”

You are here: Lesléa Newman > Books for Adults > Anthologies > Pillow Talk: Lesbian Stories Between the Covers