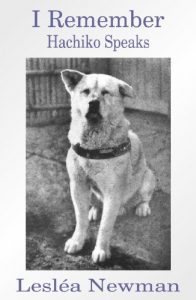 A chapbook of poetry told in the voice of Hachiko, Japan’s famous Akita, as an old dog looking back on his life. Hachiko was born in 1935 and owned by Professor Eisaburo Ueno. Every day he accompanied his master to the train station, ran home, and returned to meet him at the end of the day. One day, the Professor did not return. Hachiko waited for 10 long years, hoping to be reunited with his master.

Based on the same true story as Lesléa Newman’s children’s book, Hachiko Waits, and the movie Hachi: A Dog’s Tale, starring Richard Gere and Joan Allen.

“Using a wide variety of verse forms, Lesléa Newman has Hachiko tell one of the most moving tales of canine devotion. The poems are informed by a tenderness that will appeal to readers of all ages. They linger in memory—an imaginative tribute to a remarkable true story.”

“What an accomplishment I Remember: Hachiko Speaks is! Lesléa Newman uses various poetic forms to portray the depth of Hachiko’s nobility. She does so with such exemplary technique that this gathering of poetry easily doubles as a volume on poetic style. By elaborating on the beauty of Hachiko’s life, and in celebrating that life, Lesléa Newman has made the loyalty Hachiko exhibited even more beautiful.”

–Wally Swist, author of Huang Po and the Dimensions of Love

“Hachiko, a dog tied inextricably to the pulse and heart of his owner, waited for a miracle for a decade. In these deftly crafted stanzas, Lesléa Newman resurrects the devoted Akita and reintroduces us to a voice that redefines faith.”

You are here: Lesléa Newman > Books for Adults > Poetry > I Remember: Hachiko Speaks