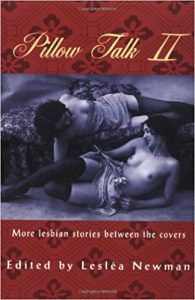 Pillow Talk: Lesbian Stories Between the Covers proved to be such a runaway bestseller, editor Lesléa Newman has been asked to edit the sequel.

Pillow Talk II is now complete with twenty-six stories as hot as the tales in Pillow Talk I. Authors include established writers such as Maureen Brady and tatiana de la tierra as well as emerging writers being published for the first time.

The stories in this second volume of the Pillow Talk series could be a lot worse and still be fairly effective as erotica. As it happens, most of them are well crafted and appropriately evocative, with an emphasis on crossing boundaries. In J.L. Belrose’s “Tyger! Tyger!” a free-spirited lover liberates her girlfriend from a hopeless relationship with her disapproving mother. In tatiana de la tierra’s “Eye of the Hurricane,” the stone butch Sirena barricades herself into a Florida apartment with her femme lover Julieta, giving Julieta what may be one final present before the storm overtakes them. Often the most successful of these tales present classic fantasy material. The working-class butch heroine of Lisa Gonzales’s “Uncommon Janitors in Lust” finds herself writhing on the desk of a brainy and gorgeous white-collar worker who can also talk about football and car repair. One quick glance at a beautiful black woman on a crowded New York City subway, and the protagonist of Rosalind Christine Lloyd’s “subway ride 4 play” manages to invite an unconventional encounter that leaves them both trembling and disheveled. Fully living up to the promise of Pillow Talk, these stories merit a place on the bedside table beside the Herotica series and Cleis Press’s Best Women’s Erotica. Anyone who still assumes that lesbian erotica is tame or badly written is now seriously out of touch.