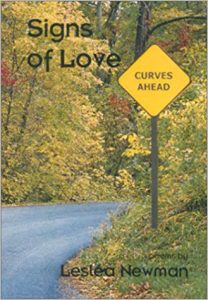 Originally published in two volumes which have gone out of print, this exciting collection explores deeply personal, yet profoundly universal issues such as childhood trauma and abuse, healing and self-love, family relationships and sexuality. These poems will elicit laughter and tears, heartfelt recognition and an appreciation for what makes us most human—love, desire, family, personal courage and joy.

“From humorous comments on our lesbian communities to lovely and luscious erotica, Newman celebrates, honors and explores her lesbian life and ours…Lesléa Newman is a lesbian poet who speaks to our hearts and minds with a profoundly original voice.”

“Newman is particularly talented at describing the complicated situation of the lesbian in the close-knit Jewish family. She is equally skilled at depicting the dulling day jobs many women find themselves in. There are fine love poems too, many humorous and pithy.”

–The Lesbian Review of Books

Ode to My Hips

Look out boy
these hips are coming through!
These hips’ll knock you off your feet
if you don’t make room for them to move.
These hips sway
these hips sashay
these ain’t no size 3 1/2 slim Brooke Shields
teenage boy hypocritical hips—
these hips are woman hips!
These hips are wide
these hips hypnotize
these hips fill a skirt
the way the wind fills a sail.
These hips have chutzpah
they think they can change the whole world!
When I take these hips out
for a walk on the street
and the sun is shining
and my bones are gleaming
I place my hands on these two hips
and let them speak the truth.

You are here: Lesléa Newman > Books for Adults > Poetry > Signs of Love