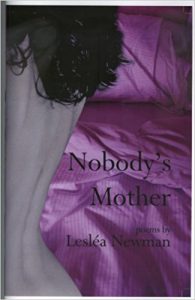 Lesléa Newman’s long-awaited new poetry collection, explores themes such as mother/daughter relationships, other family-of-origin relationships, Jewish identity, aging, loss, and self-acceptance. The poems are told in an accessible style with the same vivid use of imagery, language, and humor as the poet’s previous work.

All with a feminist twist, of course! Some of the poems have been previously published in Lilith Magazine, Cimmaron Review, Salamander, The Sun, and Bark. Others have won such honors as being named finalists in the Pablo Neruda Prize for Poetry (2007) and the Sow’s Ears Poetry Review Contest (2007). Lesléa Newman has had the honor of being Poet Laureate of Northampton, Massachusetts.

“Lesléa Newman has given us a strong book of carefully crafted poems that never run dry. She writes honestly and with emotion that is powerful and moving, whether she is conjuring up her grandmother, fully fleshed moments and places, cats, dogs, and people who become vivid to us.”

“Lesléa Newman’s work as a writer is characterized by a tremendous zest for living. Nobody’s Mother echoes Lesléa’s previous collections in that it claims a passion for all that is human, all that characterizes an emotional life lived to the fullest. What I like best about Lesléa as a poet is her ability to get her finger on the pulse of a moment and keep it there longer than most writers can or will. That’s how she gets to the truth of things, applying creative pressure and not letting go.”

“Hers is the lovely, heartbreaking world of relationship—to mother, aunt, pet. Her poems are barefaced, bold-hearted, and utterly accessible, painting portraits of a life both poignantly personal and wrenchingly familiar.”

I feel good about my neck
and let us not forget
the shy cashmere nape
hiding behind a thick
velvet drape of hair that parts
when my beloved seeks a special treat:
the sweet tender meat
of a blushing fuzzy peach